Warning: "continue" targeting switch is equivalent to "break". Did you mean to use "continue 2"? in /srv/www/htdocs/templates/2worlds2go_biz/functions.php on line 202


In to the void. Two days with the Oculus Rift. 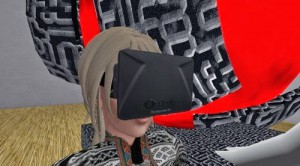 I have been spending two days now with the Oculus Rift and I have had a lot of fun. It have been nothing of what I did expect. For good and worse. After some experimenting I finally got it going. Not to difficult. Of course I use DK2 so not much software are ready to use. It is very new.

I have been testing games and of course Second life. And I have to say SL looks better in real immersive 3D. The Oculus screen is still to low resolution but you get the idea where virtual worlds are going in the future. I thought that rides and big landscapes would be the best but I was so wrong. Rides gets me motion sickness. When to may things move the brain just cant take it. Big landscapes do not translate very well to 3D. No it’s the small areas, houses and glades that really work the best. 3D art looks great. There is a new art form coming now me think.

And of course the avatars. That’s the best of it all. Wow what cool avatars there are out there in SL land. When you see them in the Oculus there is a big difference from the ordinary computer screen. I just had to check out the adult areas and whhooohhooo HOT stuff. Guess why many people will buy this thing.

What I would like to have in SL is a nice café where you can sit and look at people passing buy. Just like RL.

The Oculus Rift is a big thing. I did some testing of some old games but size and gameplay are really off. I had a lot of fun with Half life 2 though. It updates so fast that I did not get any motion sickness. It is still a problem but maybe DK2 will fix that.

Cant wait to visit some more places. My city on the OSgrid when it come up again and many more. Virtual worlds feels fresh again.

In to the void. Two days with the Oculus Rift.